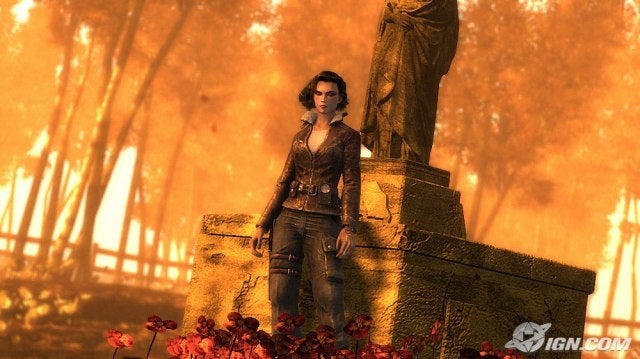 The gamplay is going to appeal to stealth fans. The pacing is quite slow since it requires you to remain as out of sight as you possibly can. Many of the locations are closed in often giving you very little room to run if you’re seen and with limited ammo, fighting it out isn’t the best idea especially since you have a handgun or knife and you’ll go against a machine gun. There’s some cover that you can hide behind such as low walls, stacked boxes, or corners though of course the best bet is to just stay hidden in the shadows.

Some obstacles will stand in the way to offer some form of challenge. Broken glass or too much movement in the grass will create noises that will alert enemies; lights will cast your shadow on the wall. Other times you can use morphine to trigger a reaction for the flashback that allows you to temporarily be unseen. (This comes from the idea of Violette becoming too ill as she remembers the painful memories in her sleep and temporarily put her in a state of mind where reality and fantasy mix.) As a result, you must move very slowly and, often need to think out proper way to approach the enemies.

The slow pace and strategy needed may turn some off. Personally, it was a nice little break from the normal mindless action games I’ve played but just as I liked it, I hated it. Sometimes the game felt unforgiving as I thought I was hidden but ended up getting seen. With very little options to get away, I became frustrated.

The gameplay is so-so. While the controls aren’t clunky, they aren’t solid either. The combat felt awkward. The knife is pretty much useless except to perform the brutal assassinations; the guns can help but only if you’re not taking someone head on. There’s little ammo and the weapon selection hasn’t been so great. Even though your enemies clearly leave perfectly good assault rifles laying there after you stabbed their eyes out and slit their throat, you can’t pick it up. Staying out of sight completely is much better than trying to be offensive with this game.

Which brings me to the fact that it gets repetitive…Sneaking around and then either going past an enemy or killing them for the key to unlock the next door has been all I’ve done for the first few levels. I had to stop because I was just losing interest in what I was doing it.

At first, I thought the environments would help spice up the game, but then they started to grow dull yet still held a sense of charm. Outside, “brown” has been replaced with “orange” as Violette moves through the Autumn woods in the evening giving the game a small feeling that reminded me of moving through the painting in the one painting quest from Oblivion, but it definitely wasn’t as unique or as pretty. The underground areas are fairly generic for most games that are set during WWII. You have your classic bunkers and underground facilities which somewhat kills the mood as you realize that the room you just entered looks just like the one you came from and the one before that…Needless to say, the colors all blend together making everything look like it’s the same shade.

Though the graphics themselves aren’t bad but everything seems stiff. Almost like much of it is glued in place with very little animations other than the characters’ movements; though even those look fake. At first I thought that maybe it was their attempt to make the game have a “dream like” appeal to it but I quickly realized that it was just lazy development with no real approach to any set “art style” or “feeling”.

Needless to say, I can’t say I’ve hated Velvet Assassin but I also haven’t hated it. The story is actually interesting. I actually took some time to read up on Violette Szabo and I’m fairly curious to see how the game’s plot stacks up to what she lived though; I also like how everything is a flashback with the developers at least being clever enough to make the morphine injects have meaning. While the game itself isn’t anything spectacular…I’ve played much worse.

I may not rush into it again for awhile since I didn’t feel extremely interested in it. This feels like one of those games that I may rent it during the Summer drought after (and if) I finish some other games I have. Or one of those games I’ll find in the bargain in the future and say, “Oh yeah, I remember this.”

Bottom line is…If you like stealthy games and have nothing better to do, you may get a couple hours of enjoyment from Velvet Assassin if you can overlook it’s obvious flaws. And also don’t dive in with big expectations.

I’m a stealth fan so I will rent this last stealth game I played was MGS4.

I was excited when I first heard the premise and when it was just early screen shots but after a while it just started to look kinda generic.

I was excited when I first heard the premise and when it was just early screen shots but after a while it just started to look kinda generic.

Yeah but its something to hold me over until Splinter Cell Conviction. Is that even going to be a stealth game anymore?