Gaming rumors that may be (or probably are) fake

“MH Next” in RE Engine by Ichinose getting announced for Switch soon, huh? 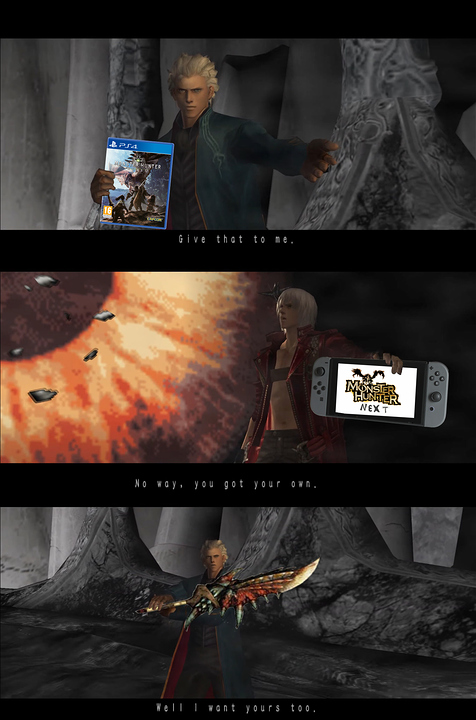 @barcster2003 this thread should be your bread and butter lol. You somehow know every rumor, believable or not.

I’m not really believing it, but if the Switch Pro ends up being true, I’ll have to continue being Switchless until then.

this thread should be your bread and butter lol. You somehow know every rumor, believable or not.

“MH Next” in RE Engine by Ichinose getting announced for Switch soon, huh?

Heard this not sure of the validity but its going around.

I’m not really believing it, but if the Switch Pro ends up being true, I’ll have to continue being Switchless until then.

Don’t know but it seems a bit smoky.

World looked amazing but I’m skeptical of some of the bigger changes they made to the series formula.

That said, I was skeptical of Hunter Arts in MHX/Generations too, and now Generations Ultimate on Switch is my most-played MH game, and I absolutely love Hunter Arts… Soooo take my skepticism with a grain of salt lol.

This guy defintely has gotten alot of stuff right.

They locked the best-in-slot weapons behind siege events that are virtually impossible to solo (Safijiva and MR Kulve) and the new monsters they’ve been introducing are absolute trash to play against. The addition of the clutch claw gives the hunter such an overpowered tool (in theory, in practice it’s extremely janky and annoying) that monsters have had their speed cranked way up and have been given loads of AOE attacks and they spend more time in enraged state than out of it. The clutch claw also resulted in hitzones that are just awful because the devs want you to use the wound/tenderize mechanic, but it’s just not worth it because openings are hard to come by and it takes two hits to the same body part to accomplish if you use a light weapon.

In a game where the basic conceit is that your hunter is rather clunky and squishy and slow, fighting monsters that are that much faster, more aggressive, and more prone to AOE spam while your only meaningful upgrade is a tool that doesn’t work right half the time makes for some miserably infuriating gameplay. When Alatreon came out it took me god knows how many times to kill him and when I finally did, I uninstalled the game and quite literally threw the disc in the trash. Even some of the monsters that shipped with Iceborne like MR Black Diablos, Barioth, and Shara Ishvalda were terribly designed, but they kept adding new and shitty monsters like Raging Brachydios, Furious Rajang, and Stygian Zinogre.

If I ever go back to MH, they need to either dial back the monsters or seriously improve the abilities of the hunters. As it is now, it’s just not fun. I can and have beaten every monster I’ve just named by myself many times and without carting. It’s just not fun to do.

I definitely understand the variants getting more and more annoying, that seemed to be the case with each new game over the years… Reskins are kinda lazy in general, though there are some exceptions I do like.

I’d have to play it myself to know how annoying, but yeah not surprised…

There are some good variants, I just don’t like the way they’ve gone about trying to rebalance the game around the clutch claw or the increased presence of DPS check mechanics. Against Kulve, if you fail a DPS check at 6 minutes, she’ll just leave the area and you fail the quest. Against Alatreon, if you fail the DPS check he’ll do a completely unavoidable instakill attack. This means that if you have 3-4 players, you will instantly fail the hunt within the first 5 even though you’re supposed to have a 50 minute time limit.

MHW was for the most part very good once you got past the early game and could get your hands on some useful HR gear. It actually gets more fun as you progress. Iceborne is the opposite. They need to seriously rethink their approach because there’s nothing fun about the game anymore. It relies on gimmicks and frustration instead of legitimate and engaging challenge. The devs should go talk to the DMC team. Those guys are a much more talented bunch and could show them a thing or two.

Personally I like the arts and styles in Monster Hunter Ultimate hopefully the switch one is like that.

Yeah I was skeptical like I said, but I’ve really come to like how they change the gameplay up. And it’s mostly optional, so you can still play an older playstyle and ignore the Styles/Arts entirely if you’d like. A good compromise between old and new.

@Sarge: Would it help if it was rumored the Switch MH has a different director? It’s possible the focus will be different. Though your complaints of Iceborne seem mostly end-game related, and “initial” versions of MH usually don’t have G/Master/endgame content.

It came to my attention that SONY just sealed 2 deals this month to acquire 2 major 3rd party publishers to join the PlayStation studios family. if true this means total Studios working under PlayStation Studios are now 16.

Glad you posted it here tho. This thread will be full of ups and downs and contentious stuff I think lol.

Square Enix would be a waste of money, Sony already gets what they want by securing exclusive deals for Final Fantasy games. The only other thing they have is Dragon Quest, pretty much everything from Eidos has gone to shit, they don’t even own Hitman anymore.

God I read that and just instantly got mad, would be the dumbest shit Sony ever did.

Yeah I was gonna say, this would only be a spite-fuck revenge move against Nintendo for DQ lol (or maybe MS with Eidos?) They pretty much have literally everything else from Square they could ever need… including a minority stake still, I assume.

Don’t know. I’m not too confident on this one because what does Square Enix gain out of this?

People are rumoring something for Sony soon

In any case I think I’ll have some fun going back through this thread every couple months lol.

Maybe I’ll put a “Hall of Shame/Fame” in the OP for debunked/confirmed “insiders” after a bit.

“Hall of Shame/Fame” in the OP for debunked/confirmed “insiders” after a bit.

The thing about rumors that helps you with their validity is how much smoke is going around about them. If there’s a bunch of smoke it means it was heard by a bunch of people.

I see what you mean but in this specific case I think you’re looking at two different fires coagulating into the same smoke cloud… “Sony bought two major 3rd party devs/pubs” may or may not be the same as “Sony bought Square.” It might not even be Square, and the guy’s making a guess. Or the original rumor is false and some guy is assuming it’s true and trying to make a name for themselves with a lucky guess. Could be any number of things here.

I’d trust smoke coming from WSJ/Nikkei over the vapors that pass as such on 4chan.