On July 31st, 1989, the original Game Boy was released in North America. 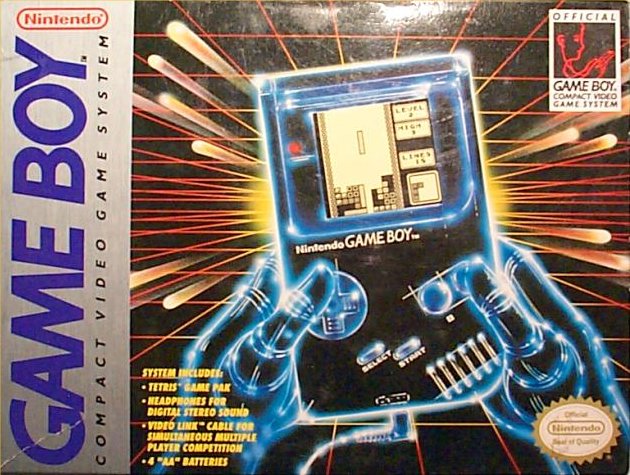 It was originally packaged with a version of Tetris, and went on to sell 118 million units (when combined with sales of the Game Boy Color.)

Some of my fondest gaming memories were played on this unwieldily brick. Super Mario Land 2: Six Golden Coins and Pokémon Blue defined my childhood almost more than the Super Nintendo did.

The original Game Boy was a very limited piece of hardware. It only had a four-color palette (rendered in various shades of green by the dot-matrix screen) and a 160-by-144 resolution display. Only 40 sprites could be shown on-screen at the same time, and no more than 10 could exist on the same scan line. Sprites were limited to 8-by-8 or 8-by-16 pixels, so any “sprites” you see larger than this were a combination of multiple actual sprites.

What strikes me the most when playing original Game Boy games is how timeless the music is. I’m an avowed fan of chiptunes, of course, but despite extreme limitations there are many games on the system with music I still enjoy listening to today. Pokemon is probably the most concrete example. It’s no wonder that the entire chiptune scene is based around the Game Boy, with the homebrew program LSDJ for Game Boy being by far the most popular creation tool.

Why was the system so low-fi? As later competitors would attest, back in the day the most important aspects of a handheld system were price and battery life. Nintendo itself learned this the hard way with the launch of the original Nintendo 3DS, which cost $250 and lasted as little as three and a half hours on a single charge. The original Game Boy lasted 15 hours on four AA batteries, and the Color could last up to 35 hours on just two AA batteries!

And despite including a free copy of Tetris, the original Game Boy cost $90 at release (about $174 today.) There were two redesigns, the far smaller Game Boy Pocket and the Japan-exclusive Game Boy Light, and a pseudo-successor in the form of the Game Boy Color (I say pseudo in the same sense as the Nintendo DSi; it has a library of its own exclusive games, but many could still be played on the original system and the hardware wasn’t a true generational leap.)

A big happy birthday to one of the most classic systems of all time.

I just got Super Mario Land 2 for free from Club Nintendo a few days ago.

Happy birthday to the best handheld.

Looking back it’s not even close the best Mario game, but I still love it. Mario Island was such a great setting to explore, and it carried over the weirdness from SML1 without going overboard with it like that game did.

Happy Birthday! The top photo made me think TROOOOOON!! lol

Yeah I like how the original boxart shows this OMG TOTALLY FUCKING RAD TRON WORLD LIKE WHOOOOAAAAAH and the game screen is a four-color seemingly-1-frame-a-second puzzle game. :lol And the system itself is a gray brick. :lol

Fun fact: The Nintendo 3DS is the first handheld I own since the original GameBoy.

Never had the original, but got the Color with PokéMon Blue and Pocket Bomberman. Got Tetris DX and Super Mario Land 2 shortly afterward. I had the original and then the solid purple gb color.

I had one of those ice blue ones. I think gameboy pocket ice blue. I got it at Target and I got Driver 2 or 3 or something with it lol

My younger sister had this one and she never treated it well. :disgust;

Everything you wrote seems fine, except for stating that people received a “Free Copy” of Tetris. This is not correct. Tetris was a pack-in. It came with all launch model systems. As I recall, you could not buy it separately at the system’s launch.

According to Nintendo, Tetris is officially listed as the first GameBoy game ever released… but in JUNE!

Alleyway, Baseball, Super Mario Land and Tennis are listed as the “launch” games for August 1989. The only other game recognized as being released in 1989 is Castlevania: The Adventure in December.

It’s amazing how massive levels feel when the resolution is so limited.

This level doesn’t look very long, but when your field of view is constrained to 160 by 144, it feels almost endless. Whenever I play SML2 I always feel like I’m missing something when I beat a level, that I haven’t “explored” enough, even though I’ve beaten the game dozens of times. It’s very rare I get this feeling in modern games.

And the Gameboy Colour was more of a successor than the 3DS currently is.

GOAT stands for “Game Of All Time”. This would be your “SOAT”.

GOAT stands for Greatest of All Time.

Or alternatively, Goat of All Time. BAAAA

[quote=“Andrex”]GOAT stands for Greatest of All Time.

Or alternatively, Goat of All Time. BAAAA[/quote]

Greatest of All Time is indicated by “GoAT”, silly.

I actually am trying to clarify this for my potential future URVT - “Ultimate Recount Vote Thread”.

This thing made late night road trips with relatives so much better.

Later on, this was the grandaddy of all my attention: I don’t really remember using it a lot after I finally got it, lol.

I actually had a Gameboy magnifier. No idea what happened to it.

I came across my original long-thought-lost Gameboy in a container in my basement. The good news is that the mold didn’t get to it! The bad news is that the batteries I left in there 15 years ago ate through it.