I’m about half way through Chapter 3 in Dead Space and so far, it’s pretty good. To me, this is what Resident Evil 4 should have been. It’s fast-paced action fights yet with an eerie, disturbing feel. The controls are very tight and smooth; jumping between the different weapons on the fly is quick and easy which comes in handy when you’re surrounded by enemies.

I love having full control of the camera and being able to move it around. Though even with complete control, the game still manages to put you on the edge with limited visibility due to areas being dark or full of fog, making you feel paranoid because you never know if something is leaking in the shadows.

However, Dead Space takes a different approach to horror. It has a lot of Eastern elements to it (things jumping out at you, dead bodies on the ground not really being dead…), but it also tries to mess with your head by making you believe you’re completely f**ked. The developers try to thrive on the idea of ‘no one can hear you scream in space’.

Shortly after the game starts, the ship you were on explodes, leaving you abandoned on the infected ship with the last two survivors of your crew separated from you. The game more or less tries to make you panic more and tries to scare you by making you think you’re going to die by requiring you to shoot specific parts of the enemies in order to kill them and throwing a bunch of enemies at you at once with limited ammo and health.

The game is also very pretty. The environments are rich in detail though I do wish they were a bit more interactive. I was running around swinging my weapon around trying to break things on tables or kick things that were laying around, but most of the background items were “glued” in place which made me a bit sad. I also was slightly disappointed to see the lack of detail in effects with certain likes, like when water was falling on me, it just went through me instead of having any effect. But I will say this…The suit looks amazing. It really looks like it was made out of a heavy duty, tough material.

So so far…I’ve enjoyed it. It still hasn’t made my palms sweat or my heart race really fast, but I’ve jumped a time or two and have had some “WTF?” moments.

FUCK SCHOOL I NEED THIS

To me, this is what Resident Evil 4 should have been.

Considering RE4 was GOTY2005 for most, this is a big statement. :shocked;

As I said, I may get a chance to play this if my friend’s rig is good enough and he picks it up. Sounds great so far.

I’m going to the LBP launch with my friend Jake (He’s getting Fable 2)! Whoopee!

I might go to the Resistance 2 launch, but just so I can hang out with him some more (He’s getting Gears 2).

[quote=“nothere413”]I’m going to the LBP launch with my friend Jake (He’s getting Fable 2)! Whoopee!

I might go to the Resistance 2 launch, but just so I can hang out with him some more (He’s getting Gears 2).[/quote]

But what was awesome was that they actually let us in the store. We were playing Rock Band, They bought us Taco Bell and Burger King, We got to play the game on 3 demo PS3’s and generally stand in a circle munching on burritos laughing about games.

It was nerdy as hell but so goddamn fun. That’s why im considering the R2 launch. I mean, i don’t it that badly, but i would love to have that experience again.

What about the Animal Crossing launches? :Q:?;

[strike]They are having those, right?

[strike]They are having those, right?

I have no idea.

I’m not sure as to how they decide which games get a midnight launch and which don’t.

Im going to be playing it real soon cant wait!

An enemy that you can’t kill? That fucking stalks you?

Hell no! I don’t want to deal with that shit again![/SPOILER]

An enemy that you can’t kill? That fucking stalks you?

Hell no! I don’t want to deal with that shit again![/SPOILER][/quote] 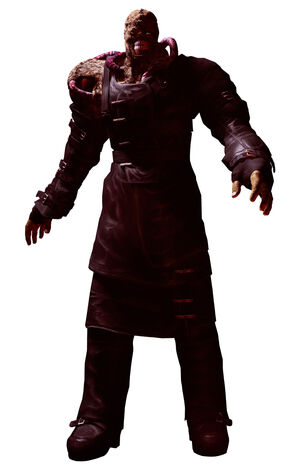 Seems your lover has reincarnated, Kumi.

Seems your lover has reincarnated, Kumi.

Really, the Nemesis is the single most uninentially-hilarious looking enemy I’ve seen in a game. He has a skirt! Who thought that would be a good idea? :lol

Really, the Nemesis is the single most uninentially-hilarious looking enemy I’ve seen in a game. He has a skirt! Who thought that would be a good idea? :lol

So the skirt is fitting.

So the skirt is fitting.[/quote]

That just makes it even worse. :plain;