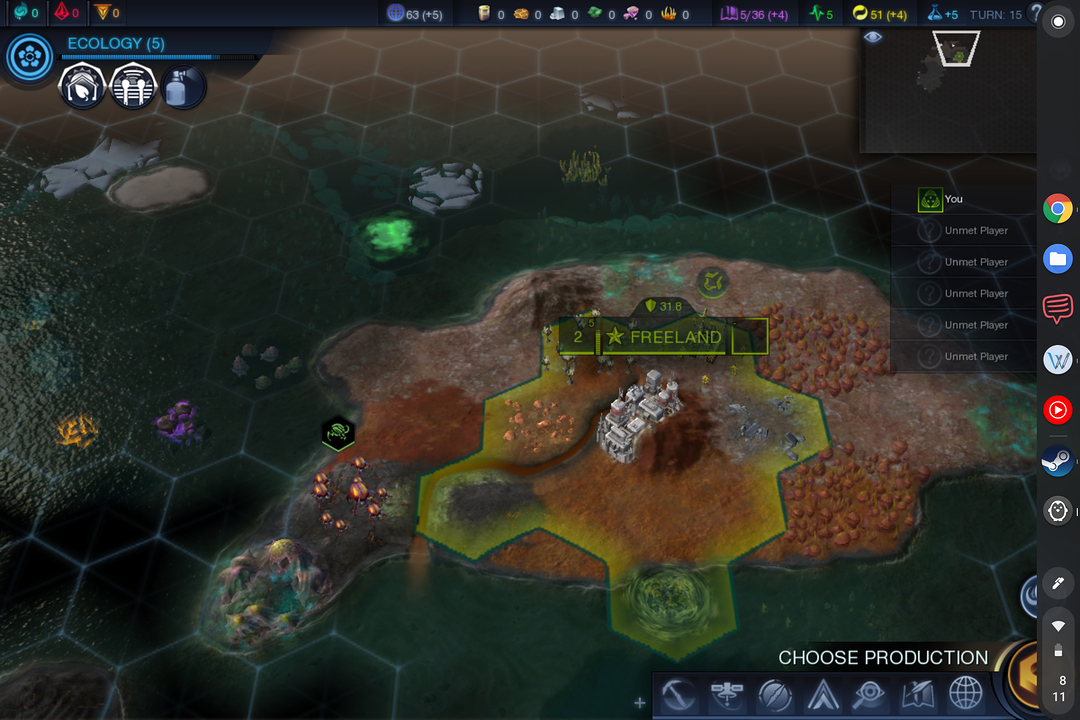 (taskbar shown on the right to demonstrate this is a real screenshot from Chrome OS.)

I didn’t need to flip any developer switches or change channels or anything. Linux gaming is here today for Intel Chromebooks, which is pretty great. All the investment Gaben has been putting into Steam on Linux (and now Chrome OS) is paying off. Civ runs pretty well!

Chromebooks with access to Google Play also have like a billion Android apps you can install too but very few games are optimized for the form factor… That said, console-like ports (like the Phoenix Wright games, etc.) are just cool to have on a laptop instead of a phone (IMO.)

Anyways I’ll be posting about my adventures in Chromebook gaming here, feel free to join the wild ride.

PS- Chrome OS now supports games written for the web, Android, and Linux… It’s not gaming, but Windows 10 support is on the way too, but only for enterprises (for now.)

PPS- RIP macOS gaming. Your support has been in question ever since you snubbed Vulkan for Metal anyways.

what tech specs/requirements does chromebook meet to play said game? what other games can it run, specifically console ports, emulation etc2?

PPS- RIP macOS gaming. Your support has been in question ever since you snubbed Vulkan for Metal anyways.

This is why this fight with Epic is a big deal. Sure they can snub epic but if they ever have plans of being big in games they are going to have to deal with Epic.

IMO this will have a trickle down effect on macOS devs, it may honestly become more like Linux gaming 10 years ago. And it’ll certainly almost sink the still-struggling macOS App Store for games since that’s gatekept by Apple too.

For iOS, I don’t see as many issues because there aren’t any other options and iPhones make bank, but it’ll further isolate “mobile gaming” from “real gaming” IMO.

For Civ Beyond Earth, I’m on an i7 (7th Gen) Pixelbook, with 16 GB RAM and integrated graphics.

For Steam, I think you have to have an Intel Chromebook. So Celeron, i3, i5, i7. Not ARM, which are generally the lower end Chromebooks.

Your Chromebook also has to support Linux, which is limited to certain models (but support has expanded a lot.)

The official Linux requirements for Beyond Earth:

The Linux support in Chrome OS is based on Debian, which is the “parent” distro to Ubuntu, so they generally share the same libraries and levels of app support. Currently it’s Debian 10, which made it’s way into Ubuntu 18.04+.

I am salty I can’t get Alpha Centauri to work, but even on modern systems it’d be hell if GOG didn’t come in… Unfortunately GOG didn’t touch the Linux version from 2002.